I’m coming up for air, the lambing season is underway. For ages the weather was 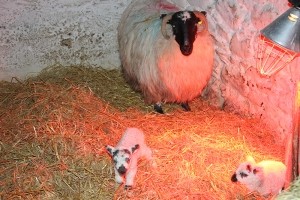 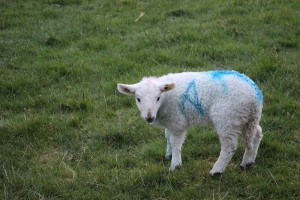 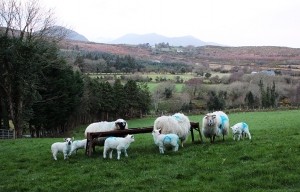 too unsettled to leave the little creatures out. It was labour intensive keeping the ewes and their lambs indoors. The stony faced barn gives nothing away as to the breathing life inside except for the red glow of the old bonham light used to warm up the little bodies.
We waited in hope that the weather would improve and finally the little lambs were rewarded with some sunshine and mild weather before St. Patrick’s Day. I go down to the Lower Orchard, the field by the old barn in the morning an hour before the dawn in anticipation of new lambs. Most of the ewes have made their way in for shelter to the old barn for the night so there is a rush of adrenalin when the torch catches a pair of eyes gleaming from the depths of the darkness out in the field as the ewes isolate themselves when near lambing. There is another rush when I catch another pair of eyes (or maybe two!) this time closer to the ground –another miracle at dawn. I go to check that they’re ok and bring them all in to a new nest of straw in the barn. Shimmers of pale gold, pink and grey are on the horizon. The stagnant rows of starlings in the open air shed stir as I walk past and a pheasant calls out to make their presence known.
Now that the stronger lambs have been left out we can only try and keep one step ahead of the weather to see whether they should be brought in for the night. Sporadic sleety showers means we brought them in last night. There was momentarily chaos and furious bleating as some lambs got separated from their mothers in the rush to come in. And then later on silence as the darkness took hold and we all breathed a sigh of relief for the welcome shelter. A busy busy time but ultimately rewarding being close to nature and lots of inspiration for future collections-watch this space!