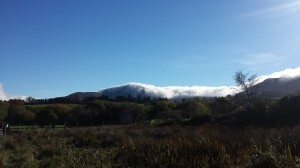 It is strange weather for November, beautiful and mild. I said to Dad I’d keep an eye on the cattle we had just moved up from the field by the lake yesterday. They are down by the road and surrounded by other neighbours’ cattle nearby and could get up to some mischief! I decided I might as well go for a run and take a left up the narrow road which divides the fields where the cattle are and watch out for them. November and the sun was shining on my back! I took long strides it was great to get out and stretch the legs, therapeutic. The leaves are still on the trees gorgeous russet and gold colours and contrasted with the greyish hues on the green grass from the morning dew. There were sheets of spiders webs everywhere covered in dew decorating the grass and gorse. I continued up by the river, it was moving quickly noisily from the rains in the last few days. However, it was in contrast with today’s blue skies and the ethereal fluffy white cloud that had descended over Crohane. The sun shining high in the sky was blinding. I spied the cattle in the small field near the road. It’s called Cait na Naomh I think must ask Dad. They were happily munching as I looked in from the road through the scarred trunks of the silver birch trees. They were all there. Grand, keeping out of trouble. I continued on my path, sheep scattered to my left and right. I stopped to catch my breath and take a sip of water. I looked up towards the farm, the belt of evergreen trees planted by Granda made a striking outline against the blue sky. I reckon he had a touch of an artist in him – a very well laid out design! Time to turn back-there were the neighbour’s new cattle on my right -lovely black fur glistening in the sun. They stared out at me curiously. The sun was making everything see through-there was lots of flies lit up like little fire flies and glints of spider webs-little limbs lingering and sparkling in the air. I gave one last look in at the cattle. Only one of them looked up at me but content she continued to fill her belly. And now back to the sounds of children getting ready for lunch at the house. I love Kerry 🙂